Turtle News And A Minor Annoyance

Posted on October 3, 2014 by Henrietta Handy

Last night as I was heading to Lil Dude’s full-spectrum light/lamp to turn it off, there was a brilliant flash and then darkness.  It scared the turtle.  It really scared me.  I moved Lil Dude 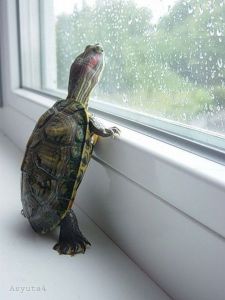 out from under the lamp and gave it the only check I knew to do: turn it off and then back on.  It didn’t come on.  The bulb is officially blown.  This is annoying because The Husband had spent $9 on the full-spectrum bulb for me and the turtle and an adjustable lamp to use it in so Lil Dude could bask and digest his food – turtles must have a certain body temperature before they can digest their food.  The Husband picked up the bulb only three weeks ago!  It should have lasted longer!

When the light initially blew I was afraid particles may have fallen into his little tank and onto his tiny little turtle head, but there aren’t any holes in the bulb I could see and I made sure to pull out the magnifying glass to make sure the thing was intact.  The Husband handled it better than me, fortunately.  His comment was, “It blew?  It should’ve lasted longer than this because this is what it was made for.  Is the turtle OK?…OK.  I will pick up another one tomorrow.”  Yeah, he handled it better.

Lil Dude is fitting in well with us here.  For a week he kept rubbing at his eyes and I went to the Internet to find out what was wrong.  He probably had the beginning of an eye infection.  Once again, The Husband was the hero and went to the pet store to pick up eye drops for the turtle.  He couldn’t find any “current treatment” eye-drops, but did find some “preventative” ones, which he promptly brought home.  So, for over a week now I have spread a chux over the laptop here at the kitchen table, taken Lil Dude out of his little tank and put eye-drops in his eyes.

According to a reptile/turtle vet on-line, the freshly eye-dropped turtle needed to be observed to make sure the drops did not cause discomfort.  While Lil Dude was on the pad in front of me I talked, cooed, and told him just how much of a handsome turtle he is.  At first he just wanted to hide in the shadow of one of my cupped hands or try to make a very quick escape – yes, quick – and I would either have to cut him off from escaping to the table or just hold my hand very still.  As time progressed, Lil Dude didn’t try to run so much or hide in the shadow of my hand unless someone was around, including The Husband.

On Tuesday when time for the eye-dropping event rolled around, Lil Dude didn’t struggle as I lifted him from the tank.  He didn’t try to run once he was on the pad.  In fact, he held still as I administered the drops.  I was talking to him this entire time, and cooing.  Lil Dude stretched his head out and up as far as it would go and seemed to listen to my voice intently.  Then he turned one eye to me – neither eye is swollen now – and then the other.  He a tentative step toward me and I kept talking.  Then, in a wild rush Lil Dude ran straight off the pad covered laptop and onto my chest.  He didn’t look away, but did the one eye, then the other eye thing and just listened as I talked.

Part of me wanted to say he was getting used to me and may even like me, but I wouldn’t.  A turtle is a turtle not a puppy or a kitten.

However, on Wednesday much of the same behavior returned.  Lil Dude didn’t struggle as I brought him from the tank.  He didn’t try to make a run for it when he was on the pad-covered laptop.  He even held still for the eye drops.  Instead of being hunkered down in his shell, Lil Dude stretched up and out as far as his neck would go.  He watched every move I made and didn’t try to run away or hide except for once: The Husband passed behind me and his shadow covered me AND the little fellow.  At this instant Lil Dude became Zippy the Wonder Turtle whose superpower is SPEED.  Lil Dude not only ran for the cover of my hand but hit my palm solidly with his head and front claws.  Afraid of traumatizing the little guy further, I didn’t move my hand.  The Husband sat in his chair at the kitchen table and began fiddling with his phone.  I talked and cooed.  I told him how smart a turtle he is and how brave he really is.  Little by little, Lil Dude came out from under my hand, his neck stretched up as far as it wold go.

Now he was in the light and apparently no angry birds had scooped him up, his throat movement/breathing slowed and he breathed normally.  As I was putting the cap on the eye-drops I was also keeping a close eye on Lil Dude should Zippy appear.  Lil Dude moved alright, but not like I expected.   With purposeful movements, the turtle marched across the pad to me and straight to my chest.  Once there he folded his front legs into his shell and looked at me, but….  I’m not sure how to explain the intent he had about him.  The closest I can come to is “peace”.

The eye-drop treatment is through for now, and, I must admit,  I am going to miss getting Lil Dude out of his tank every day.  I only need to put preventative drops in his eyes once a week now.

The Husband saw Lil Dude’s behavior and just smiled.  My Daddy always said I could pet-up anything, i.e. tame anything.  There is no denying this behavior from him could be rote, just repetition of events he has come to expect.  This explains his lack of struggle on coming out of the tank and staying still on the pad.  But what does it say when he comes to sit with me and listen to me as intently as he does?  Are turtles as smart as dogs and cats?  Smarter?  No wonder turtles are viewed in many cultures as symbols of wisdom.

*Note:  The turtle picture in this post is not of my Lil Dude.  Lil Dude has been camera shy today.

I have returned home to the mountains. No more am I "a mountain-girl far from home." Diagnosed with rheumatoid arthritis at 2 1/2, I understand pain, fatigue, laughter, joy, and love all while on crutches and in wheelchairs. This blog is just about me, mostly the writing side, but there are forays into so many different topics. I am married to a wonderful husband who puts up with my writing, knitting, yarn, with the love of a saint. We have fur babies, and one cat who rules us all.
View all posts by Henrietta Handy →
This entry was posted in 2014, animals, Daddy, good days, good times, life, mountains, turtles and tagged animals, fathers, kittens, love, Mommy and Daddy, parents, pets, puppies, turtles. Bookmark the permalink.

2 Responses to Turtle News And A Minor Annoyance